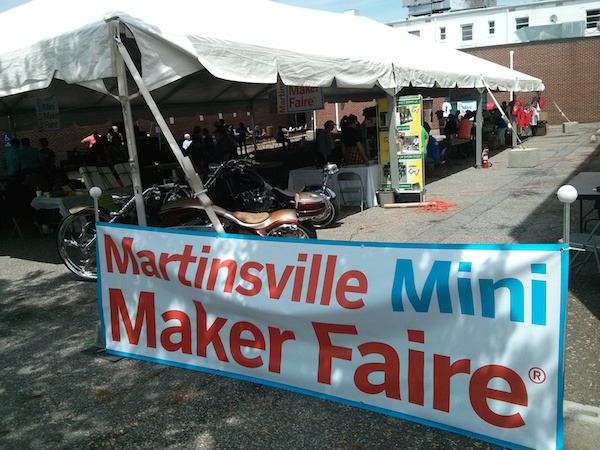 This past Saturday, some of the members of Splatspace made a field trip up to Martinsville, Va to visit the Martinsville Mini Maker Faire and show our support for our maker friends. The day was perfect for it.  It was sunny and in the upper 70s,  the fields were green, the trees were blooming,  and we got to see the countryside on the way up.

The event was held in Uptown Martinsville in The Artisan Center,  which is a really awesome space, housing artist space and Martinsville Fab Lab.  For more info, visit the website of The Artisan Center,  it was pretty amazing to see all the awesomeness under one roof-including kitchens, a dance floor, and a wood shop, as well as the first official Fab Lab in Virginia. ( It truly made us daydream about all that available space in our building. 🙂 )

There was a lot of great stuff to see at the Mini Maker Faire!  We made brush bots from cut off toothbrushes,  batteries,  and little vibrating mini discs. We oohed and ahhed over the Fab Lab Martinsville’s equipment, including the big mother-trucking Roland.

Imagine all the possibilities!

We invented RaptorCorns. They were out of the legs for unicorns that they had cut out on the laser cutter, but had Raptor legs, so we made RaptorCorns! This later inspired me to scan it and soon it will become stickers out of Splatspace’s own vinyl cutter. What sound does a Raptorcorn make?

It was a really great day!  Thanks to the Martinsville organizers for such a great event!