This past weekend members of Splatspace joined Cory Doctorow at Flyleaf Books. Doctorow was here for his book tour, and was doing a great talk on internet freedom, attempts at balkanizing the internet, and the legal issues surrounding use of the internet. He also, of course, said a few words about his friend, the recently departed Aaron Swartz. As part of his presentation, he points out that hackerspaces have an important role to play in joining a community that will help fix our digitial infrastructure, both technologically and legally.

Because of that role, Doctorow has been inviting hackerspaces to join him along his tour–it was in that capacity that he gave us a few minutes before his talk to talk about the space.

The entire event was a blast. We presented one of Jeff Crew’s 3D printers (Big Red, the sibling of the printer in the space, Big Blue) and the Pirate Box with a new acrylic case. We also talked about Splatspace and it’s ongoing efforts with schools and libraries. We printed a variety of small trinkets as handouts and demonstrations, and had a variety of CC licensed media on the piratebox, along with installers for Tor and Truecrypt for all platforms.

We met a lot of new people at the event, and got a lot of interest in the space and our projects. If you’re one of the new faces we met, we hope to see you at the space soon! 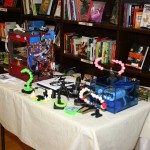 Our table of stuff–3D printer, printed objects, and the pirate box. 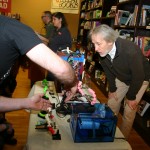 Jeff setting up while our first interested party looks on 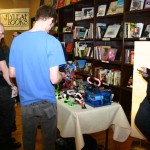 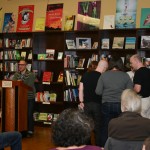 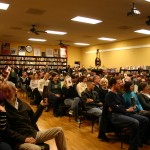 The crowd that showed up for the presentation was huge. 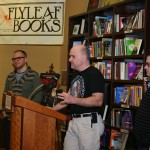 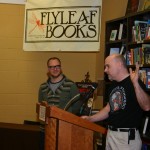 Jeff tells the crowd and Doctorow about our work with schools and libraries. 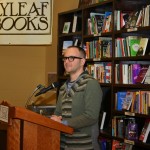